We all have that friend who gets excited about a new card that everyone else is overlooking. Perhaps they have uncovered some new three card combo-kill for Modern or a unique interaction with an existing Legacy or Vintage archetype. Usually, these ideas don’t pan out, and most people will move on to a discussion about the latest Planeswalker or cycle of dual-lands. Every once and awhile though, our friend was right, everyone else did miss something! It’s rare moments like this when we get to watch as an unsuspecting opponent picks up a card to read it for the first time, scratches their head, and then hands the card back across the table to our friend — the innovator.

Robert Cuellari and Vieko Franetovic are two such innovators; both have a penchant for sculpting and testing decks whenever a new card catches their eye. When the Hour of Devastation spoiler came out, Cuellari and Franetovic began gushing over the card Hazoret’s Undying Fury and expressing its potential in a Mono-Red Storm deck. Sure enough, by the time the set was released they began putting up 5-0 results on Magic Online with a brand new deck: Ruby Storm (mono-red storm). 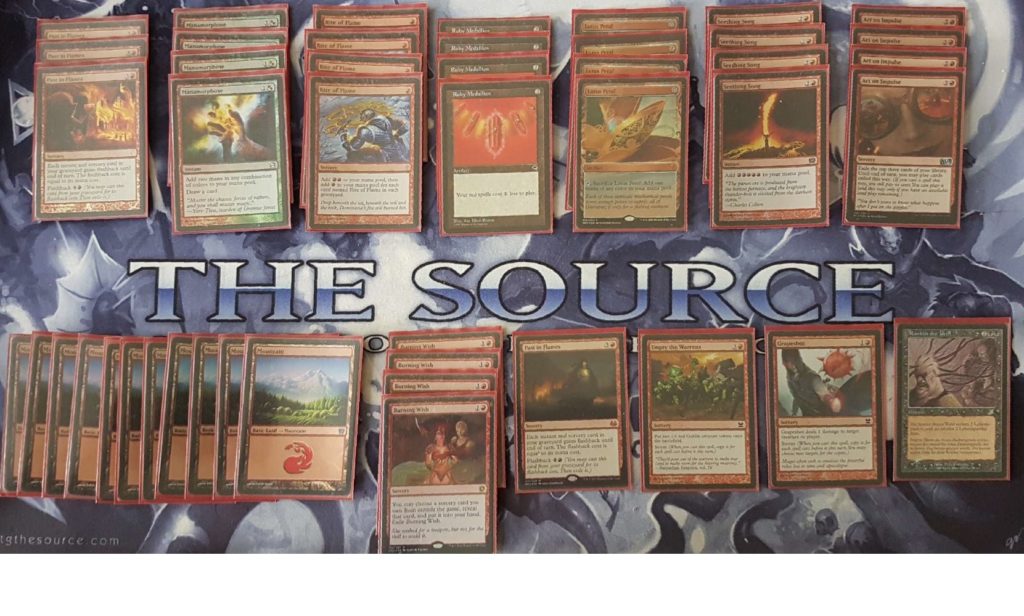 Mox Elder: “Tell us a bit about yourself, and when did you start playing magic?”

Rob: “My name is Rob, and I’ve been playing mtg since I was 12, with a few breaks in Between. I also play guitar and my day job involves troubleshooting in the ad-tech industry. I’m originally from New York City area, but I moved to Berlin, Germany about a year ago. My wife and I just had a kid, so I’ve been busy!”

Vieko: “I’m a software developer working and living in Canada. My focus is on video game publishing, web development, and web operations. I graduated with a BFA in Drawing and worked in advertising + branding for quite a while. In a parallel universe, I’m a classical guitarist.”

Mox Elder: “How did you begin playing legacy?”

Rob: “I played in the first Legacy Grand Prix where I have a fond memory of getting my Meddling Mages signed by Chris Pikula and then promptly having my dreams crushed by him in round 4 while I was 3-0. Damn it. I used to play a lot of old Extended. I think Legacy best reflects that for today; the power of the Tempest/Urza’s blocks with all the Dual Lands and everything kept in check by Force of Will …and bannings.”

Vieko: “There was a weekly Legacy tournament close to my house; I had a decent Modern collection … I decide to build Legacy Burn, became friends with a motley crew of Legacy nerds and never looked back.”

Mox Elder: “Is there a particular style of deck you gravitate towards, and why?”

Rob: “I tend to give everything a try, but I have an affinity for non-tier-one brews. I don’t spend too much time optimizing decks to beat, as I’m not willing to put that many hours into a deck that already has results. I’ve been playing competitively since Tempest, but haven’t made the time to travel to tournaments outside of small local ones in the last five years or so. I’ve probably played every deck in Legacy that is on Established Decks list on The Source (mtgthesource.com). In general, I find quirky card interactions are more fun than good cards that stand great on their own.”

Vieko: (said with a smile) “Combo … I love broken things and who has the time to kill in 10 turns?”

Mox Elder: “Let’s talk about the deck a little bit. What’s the strategy of your deck and how does it slot into the Legacy metagame.”

Rob: “This deck is another Storm variant, which I decided to brew after seeing Hazoret’s Undying Fury. The current build only uses one copy of the card, and surprisingly most of the deck has been legal in legacy for about two years. Maybe miracles kept a deck like this off the radar, or maybe it was never conceived until now.

Vieko sent me a list a while back for Dragonstorm using Ruby Medallion. After recalling that Sapphire Medallion was in the old 1x nerfed UR Trix deck, I figured it might be worth trying these reduction effects, but instead of aiming for Dragonstorm … aim for all these nerfed versions of banned cards. (Hazoret’s, Act on Impulse, Past in Flames, Seething Song, Desperate Ritual) ”

Vieko: “I met Rob on The Source while tweaking my Legacy Dredge list for GP Seattle-Tacoma a few years ago. We’ve been jamming on / off since then. We have worked on Dredge, Manaless Dredge, Reveler Burn, Dragonstorm, Ruby Storm, among others. Whenever a new set drops, we’ll post spoilers (on Slack) and nerd out! For Ruby Storm, he posted his original list well over a month ago, and we’ve been obsessively iterating on it since.”

Rob: “The primary win condition is killing with Storm. Tendrils of Agony, Grapeshot, or goblins (Empty the Warrens). The deck is capable of winning by decking, and there a few lists that run Chandra, Torch of Defiance as a backup win condition and answer to creature threats. In addition, Scab-Clan Berserker is a great option vs. Storm decks. I suppose it can come in against the grindy cantrip decks, assuming they board out some removal.”

Vieko: ” We’ve reached a common list that branches out to a couple of different approaches: Rob’s take has a ton of redundancy, burns through opponents counter magic and will win eventually. It abuses Hazoret’s Undying Fury and Reforge the Soul to do so. Sometimes it whiffs hard, and sometimes it overkills the opponent (and I mean OVERKILLS).

My approach is closer to traditional storm archetypes. It is one turn slower than TES and one turn faster than ANT with higher resilience than both but no discard. Both deck-lists make use of Ruby Medallion for busted lines of play. Most opponents underestimate the power of this card.”

Rob: “Fair decks have to waste quality cards on the mana reduction effects because they make everything else overwhelming. Sometimes it doesn’t even matter. The deck is quite fast. Decks that are good against storm decks are also good here, but Wasteland isn’t as Strong. Neither is Chalice of the Void. (it hits Gitaxian Probe and Rite of Flame (that’s it)). Defense Grid out of the board is not bad.”

Vieko: “Are there fair decks in Legacy?”

Mox Elder: “Alright, how about the unfair decks?”

Vieko: “Creature-centric strategies have a hard time against Ruby Storm (D&T is the exception). Burn can be difficult if we don’t get a fast hand. Lands … Hahaha, Lands. Delver variants are very manageable once you understand the matchup. 4-Color-Pile is challenging, Show & Tell / Mono Red Sneak are tough match-ups, difficult but winnable. Reanimator is hard but not impossible as we are super fast and have answers post board. TES/ANT are my favorite match-ups that I want to avoid. Eldrazi is a joke as long as their training wheels (Chalice of the Void / Thorn of Amethyst) don’t come down. My beloved Dredge tends to lose hard to Ruby Storm.”

Mox Elder: “Walk us through your sideboard a little bit. How did you land on these cards?”

After that, I try to think of match up specific cards: Defense Grid, Abrade, Tormod’s Crypt, and Scab-Clan Berserker. Those are the card that I’m playing right now, Though I have an extensive list of other applicable sideboard cards that I rotate with. Some of these cards include Rending Volley, Bedlam Reveler, Chandra, Torch of Defiance, Blood Moon, Fiery Confluence, Magma Jet, Goblin War Strike, Sulfur Elemental, Hazoret’s Undying Fury.”

Vieko: “Ruby Storm has a Wish board to handle most situations. Asides from that, there’s a handful of two-ofs with focus on specific matchups: Tormod’s Crypts for graveyard centric strategies, Rending Volley / Abrade for troublesome creatures and artifacts, Defense Grid / Blood Moon for counter-heavy strategies and greedy mana bases. The sideboard rock star is Scab-Clan Berserker; it is so good against almost anything (mainly our Storm brethren).”

Mox Elder: “I have to say, I love that the deck plays Gamble. It was one of my favorite cards when it came out as it’s a win for both flavor and game mechanics. Also, it wasn’t too broken back during Urza’s Block if I remember accurately. I’m sure Gamble must synergize incredibly well with Past in Flames given that the entire deck is red. Perhaps mono-red makes for the best possible Past in Flames strategy?”

Rob: “Gamble? Back then I think it was just meant as a bad tutor. I remember playing it in old Sneak Attack decks when it was in standard (Type Two) and The amount of graveyard stuff was pretty limited other than Yawgmoth’s Will and Recurring Nightmare. This deck vs other Past in Flames decks? Ruby Storm is more effective at filling up the graveyard with cards it can cast, and most other storm decks use a lot of cantrips that are hard to cast the turn they cast Past in Flames. Yeah, in this deck everything is red so you’re just casting red rituals or red card (or probes) which builds a bigger storm.

Also other decks have a lot of discard spells (7 is the norm) so the graveyard for those decks is full of those and Fetch Lands as well. Not to say those decks aren’t good … They are quite good.”

Mox Elder: “Were you guys aware that both of you are guitarists? Do you think your choice in instrument says something about your Magic choices?”

Rob: “Yeah, we figured that out at some point. Dunno! I just don’t want to play a tier one deck. Something about that bothers me. I think I lean more towards the Johnny player than Spike or Timmy.”

Vieko: “I think it speaks to our creative side and as Rob once mentioned, it is probably one of the reasons why we both like brewing Magic so much.”

Mox Elder: “Okay, one last question. In the entire history of the game, what is your favorite Magic card?”

Rob: “Dark Ritual. The card has been around the whole time I’ve played magic. From obvious noob combos when I started like Ritual into Hippie (Hypnotic Specter) to Control-Necro (Necropotence) to dirty combo decks like Jar and Trix and now today with ANT and TES it’s just one of those cards that allows you to sacrifice card advantage for raw power. Sign me up! Not thrilled with the new art though.”